Daisy Wells and Hazel Wong are in Egypt, where they are taking a cruise along the Nile. They are hoping to see some ancient temples and a mummy or two; what they get, instead, is murder. Also travelling on the SS Hatshepsut is a mysterious society called the Breath of Life: a group of genteel English ladies and gentlemen, who believe themselves to be reincarnations of the ancient pharaohs. Three days into the cruise their leader, Theodora Miller, is found dead in her cabin, stabbed during the night. It soon becomes clear to Daisy and Hazel that Theodora’s timid daughter Hephzibah, who is prone to sleepwalking, is being framed. And within the society, everyone has a reason to want Theodora dead. Daisy and Hazel leap into action and begin to investigate their most difficult case yet. But there is danger all around, and only one of the Detective Society will make it home alive.

Be the first to review “Death Sets Sail: A Murder Most Unladylike Mystery” Cancel reply 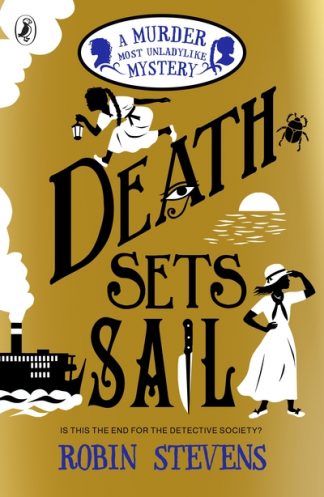 You're viewing: Death Sets Sail: A Murder Most Unladylike Mystery €9.00
Add to basket